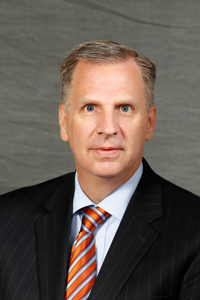 Getting to Know Jim Kroeker
James L. Kroeker was appointed a member and vice chairman of the Financial Accounting Standards Board (FASB) on September 1, 2013, later reappointed to a second term that extends to June 30, 2024. In the latter role, he assists the FASB chairman in representing the Board to external stakeholders and in conducting its internal operations, in addition to serving as a voting member of the Board.

Prior to joining the FASB, Mr. Kroeker served as the Deputy Managing Partner for Professional Practice for Deloitte. Before joining Deloitte in January 2013, he was the Chief Accountant of the Securities and Exchange Commission (SEC)  from January 2009 until his departure in 2012. In that capacity, Jim served as the senior accounting professional for the Commission and the principal advisor to the Commission on all accounting and auditing matters. In his capacity at the SEC, he was responsible for resolution of a wide range of globally significant accounting and auditing issues.

While at the Commission (he joined in February 2007), Jim played a key role in efforts to improve the transparency and reduce the complexity of financial disclosure. He served as staff director of the SEC's Congressionally-mandated study of fair value accounting standards, and he led the efforts of the Office of the Chief Accountant to address the economic crisis, including steps to improve off-balance sheet accounting guidelines. Jim also served as the Designated Federal Officer responsible for the staff oversight of the SEC's Advisory Committee on Improvements to Financial Reporting. He also was responsible for the day-to-day operations of the office, including resolution of accounting and auditing practice issues, rulemaking, and oversight of the FASB and PCAOB.

Prior to joining the SEC, Jim was a partner at Deloitte in the firm's Professional Practice Network and was responsible for providing consultation and support regarding the implementation, application, communication and development of accounting standards, including disclosure and reporting matters. Jim was Deloitte & Touche's representative on the AICPA Accounting Standards Executive Committee (AcSEC). He also served as a Practice Fellow at the Financial Accounting Standards Board.

Jim received a Bachelor of Science degree with an emphasis in accounting from the University of Nebraska in May 1992.