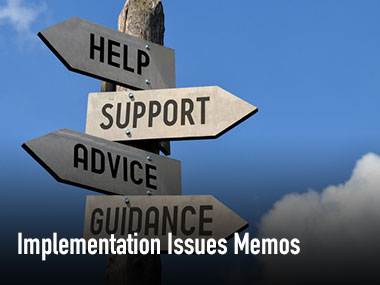 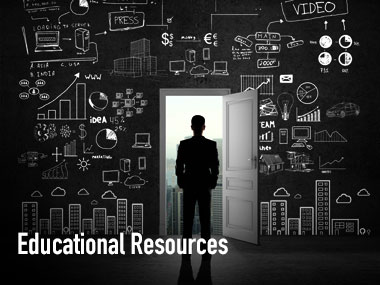 WHY DID THE FASB ISSUE A NEW STANDARD ON CREDIT LOSSES?

Current GAAP requires an “incurred loss” methodology for recognizing credit losses that delays recognition until it is probable a loss has been incurred. This model has been criticized for restricting an organization’s ability to record credit losses that are expected, but do not yet meet the “probable” threshold.

In the lead-up to the financial crisis, financial statement users were making estimates of expected credit losses using forward-looking information and devaluing financial institutions before accounting losses were recognized. This highlighted that the information needs of users differ from what GAAP requires.

Similarly, preparers expressed frustration during this period because they could not record credit losses that they were expecting due to the fact that the probable threshold had not been met.

In 2008, the FASB and the International Accounting Standards Board (IASB) established a Financial Crisis Advisory Group (FCAG) to advise the Boards on improvements in financial reporting in response to the financial crisis. The FCAG recommended exploring more forward-looking alternatives to the incurred loss methodology.

With this feedback in mind, the FASB embarked on a project focused on the objective of better aligning the financial reporting for credit losses with the informational needs of financial statement users.

Over the course of the project, the FASB solicited feedback on various approaches to meeting this objective by issuing three due process documents, which resulted in the consideration of various expected credit loss models and feedback from 3,360 comment letters. In redeliberations, the FASB emphasized the scalability of the standard and considered feedback from organizations of all sizes, including community banks and credit unions.
CONTINUE TO FULL PROJECT INFORMATION

WHAT ARE THE CORE PRINCIPLES OF THE NEW STANDARD?

Under the new guidance, the allowance for credit losses is a valuation account that is deducted from (or added to) the amortized cost of the financial asset to present the net amount expected to be collected.

The income statement reflects the measurement of credit losses for newly recognized financial assets, as well as the expected increases or decreases of expected credit losses that have taken place during the period.

The measurement of expected credit losses is based on relevant information about past events, including historical experience, current conditions, and reasonable and supportable forecasts that affect the collectability of the reported amount. The standard does not require a specific credit loss method, allowing an organization to use judgment in determining the relevant information and estimation methods that are appropriate in its circumstances.

Most organizations should be able to leverage existing systems and processes to comply with the new standard, and organizations will not need to forecast economic conditions over the entire contractual life of long-dated financial assets if those forecasts are not supportable.

The ASU also will expand upon the current credit quality disclosures by further disaggregating the reported amounts by their year of origination. This increased transparency will help investors and other financial statement users better understand the credit quality and trends of asset portfolios.

Credit losses for available-for-sale debt securities should be measured in a manner similar to current GAAP. However, the ASU will require that credit losses be recorded through an allowance for credit losses, which will allow subsequent reversals in credit loss estimates to be recognized in current income. In addition, the allowance on available-for-sale debt securities will be limited by the amount the fair value is less than the amortized cost.
CONTINUE TO FULL PROJECT INFORMATION

HOW WILL THE NEW GUIDANCE IMPROVE ACCOUNTING FOR CREDIT LOSSES?

The new guidance aligns the accounting with the economics of lending by requiring banks and other lending institutions to immediately record the full amount of credit losses that are expected in their loan portfolios, providing investors with better information about those losses on a more timely basis.

The ASU requires an organization to measure all expected credit losses for financial assets held at the reporting date based on historical experience, current conditions, and reasonable and supportable forecasts. Financial institutions will now use forward-looking information to better inform their credit loss estimates. 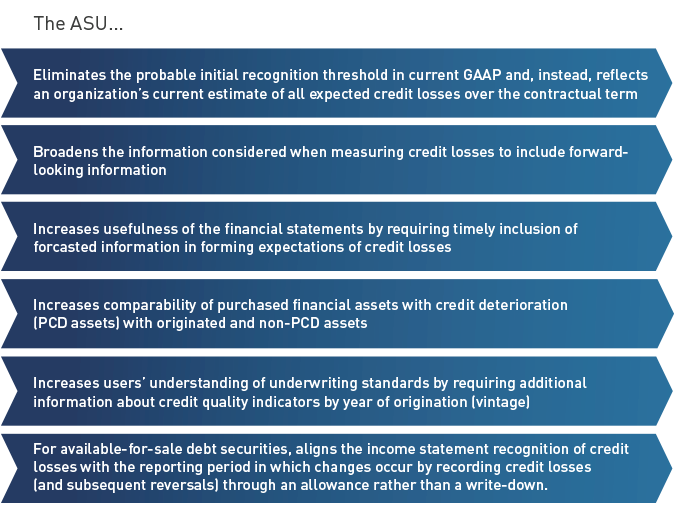 WHO WILL BE AFFECTED BY THE NEW GUIDANCE?

The amendments affect organizations that hold financial assets and net investment in leases that are not accounted for at fair value with changes in fair value reported in net income.

The amendments affect loans, debt securities, trade receivables, net investments in leases, off-balance-sheet credit exposures, reinsurance receivables, and any other financial assets not excluded from the scope that have the contractual right to receive cash.
CONTINUE TO FULL PROJECT INFORMATION

WHEN WILL THE STANDARD BE EFFECTIVE?

The effective dates for Update 2016-13 are as follows:
Early application is permitted.
CONTINUE TO FULL PROJECT INFORMATION
×
×